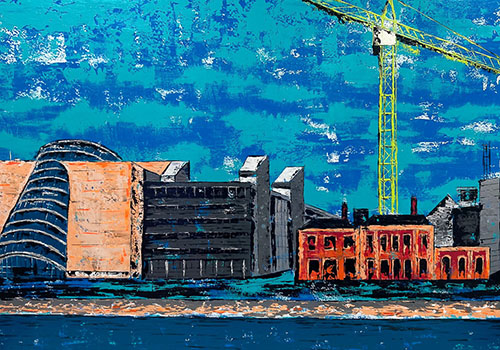 Canvas in the Sky

Often seen as symbols of prosperity, cranes are now being attributed to the unacceptable housing crisis. However, there is something majestic about them bowing and dancing amidst the concrete and the glass of Dublin City - and keeping secrets.

Tim Bingham is an award winning creative and published lens-based artist from Killarney, Ireland. Tim’s photographs have been exhibited in a number of exhibitions within across Europe and America.
His work aims to capture a descriptive narrative and truthfulness in all the urban images, in detail with an original eye.

Director's Statement
A thought-provoking short film on the impact of cranes on Dublin city. The short is set against the backdrop of the Dublin skyline as it changes each passing day as cranes deconstruct and construct new buildings. Karen Lee visual artist paints with palette knife these majestic features which now dominate the Dublin streetscape. The short marries the moving visuals of the director with the artists’ work and the poem written by Noreen Bingham, impacting on the Historical heritage of Dublin City.