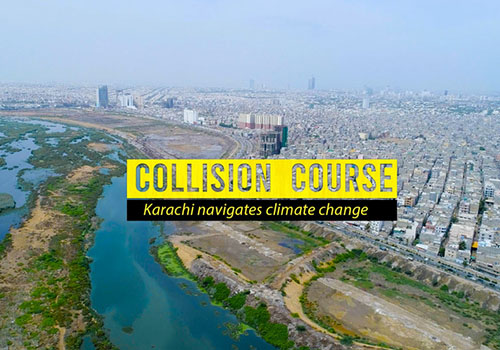 Karachi is a fast-growing city of 25 million people, and will soon be be among the 8 most populous cities of the world. But this unplanned growth has come at a heavy price. Karachi was ranked among the 10 least liveable cities in the world by the Economist magazine. More than half the city’s population live in squalor, without access to running water, reliable electric and gas supply, and deplorable solid-waste-management and sanitation. This makes the people of Karachi extremely vulnerable to climatic events, such as heatwaves, urban flooding and worsening access to water. How exactly are Karachiites at risk? What are some of the ways that they can adapt to navigate Karachi’s collision course with climate change? That's what this film tries to answer.

Cyrus Viccaji is a content creator and educator who grew up in Karachi. He studied Communication Design from The Indus Valley School of Art and Architecture with a focus on photography and filmmaking. He went on to work at Pakistan’s first English News channel, Dawn News as a reporter and producer, shooting, editing and scripting a lot of his early work that covered topics from Heroin abuse to Art and Culture. He has worked on promotional films for the Education Departments of the Government of Punjab and KP, visiting close to a hundred cities, schools, and interviewing close to a thousand diverse stakeholders around Pakistan and South Asia. He has produced prime-time series and worked on feature-length documentaries and is currently developing more personal content for youtube that draws on his background in improvisational theater and music.