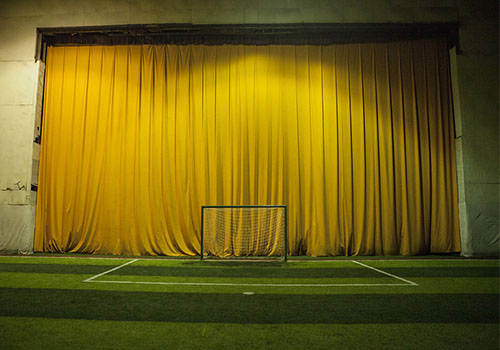 From the silver screen to soccer field

“Yıldız Movie Theater” was opened in the beginning of the 1950’s. The location and the environment of the cinema have changed because of the fact that urban renewal within years. Video work approaches this transformation from social and architectural perspective.
“Basmane” is that the region of the movie theater was the city center of Izmir. However, in the beginning of the 2000’s, many immigrants came to Izmir and “Basmane” has started to become male-dominated area. Then, “Basmane” has become a marginalized region.
The cinema “Yıldız” had affected by that change and the place has been changed as enclosed soccer field and billiards saloon.
It is easy to notice the traces of these constrained and rushed changes in the place. The goalpost in front of the silver screen clarifies the morphological contrast and social history of the cinema.
This work addresses an issue with architecture as a witness of the social memory, the process of transformation of soccer field from a cinema and the social impacts of cinema and football.

Özgür Demirci is an artist who creates works in various media. A large part of his oeuvre consists of videos, performances, objects, installations and works specific to the location of the exhibit. Demirci obtained his BA in Interdisciplinary Arts at Yıldız Technical University in 2008, Istanbul, and his MA in C:Art:Media at Valand School of Fine Arts in 2010, Gothenburg. He is PhD candidate at Dokuz Eylül University Art and Design department. He took part in group shows and public projects in Turkey, Sweden, Japan, Italy, Germany, Poland, Slovakia, Czech Republic, Holland and Bulgaria. He has been involved international residencies including; Residency Unlimited – USA, Künstlerhaus Dortmund - Germany, Arcus Project - Japan, Unidee in Residence – Italy, Borusan Art Center, Turkey. He received several grants and prizes for his projects from ArteEast, Goethe Institut, European Cultural Foundation, Turkish Cultural Foundation, Anna Lindh Foundation, Uni Credit Grant, Otto Och Charlotte Mannheimers Fond, recently he received O’art Prize in Turkey. He had solo shows at Pasaj project space, Öktem&Aykut Gallery in Istanbul and Corridor Project Space & De Kijkdoos in Amsterdam. He is a member of B.I.T. Collective. Demirci lives and works in İzmir and İstanbul.