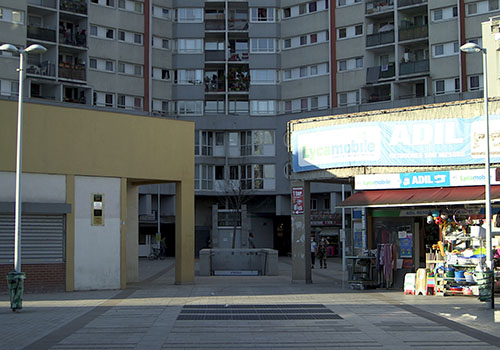 As the Grand Paris Express constructions and the 2024 Olympics loom ahead, La Courneuve is going through major urban developments. In the month of August 2021, as the Tokyo Olympics are being broadcasted, filmmaker Pauline Blanchet filmed the everyday life of the city. Using interviews with inhabitants of La Courneuve and participatory video, this small window into the area shows a city in full construction. This project was funded by Atelier Médicis and produced in residence at FACE.

Pauline Blanchet filmmaker and audio producer interested in urban areas in the midst of change. As a documentary film director, she explores the perceptions and effects of external forces such as digital infrastructure, corporate re-generation programmes, and international sporting events on local habitants. Her previous work has also looked at the global sex workers’ rights movement, representations of refugeehood, the climate crisis, and child migration. She is particularly interested in the impact of participatory video in filmmaking.
After graduating from SOAS, University of London with a degree in International Development and Linguistics, she founded Aral Sea to widen participation in the creation of documentaries, photography, and audio. Aral Sea projects deal with issues of social and political importance. Born in France, she spent most of her life in London and she is currently based in Paris completing her MA in Urban History and Culture.