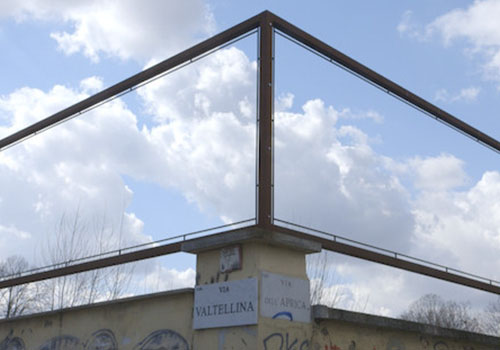 Milan 20/21 tells the city starting from a question: how has the perception of the urban environment changed during the pandemic? The short film, which develops only with images, ambient audio and music, is divided into scenes, each of which includes one or more episodes. Only the return of the image of the cathedral marks the chronology of the pandemic. For the rest, the temporal and spatial dimensions follow an intimate narrative thread. You can see the empty and rusty billboards, the windows closed to stop commercial activities, but also the omnipresence of national flags, the contrast between buildings of the past and new architecture, industrial archaeology on the verge of its dissolution. Milan 20/21 wants to show how the health emergency has changed the sense of time. Here, then, is that some scenes concern perception: the anguish of the night streets, the wonder that can arise from details of the city, the transformation of construction sites and advertisements into dreamlike images. Slowly the short lets us glimpse the exit from the emergency and the birth of a new gaze, which senses the great changes coming, starting from a tumultuous and perhaps contradictory urban development in Milan.

Maurizio Dalla Palma is a journalist based in Milan, Italy. He worked in all-news tv channels and newspapers. Now he is a coordinator in the news and current affairs office at Grazia Italia Magazine. In 2012 Maurizio attended Introduction to Multimedia Storytelling at the Columbia Journalism School in New York City. Maurizio's short doc We Will Not Leave Chinatown (2019) and Acquabella - The Dying Farm (2020) premiered at the Milano Design Film Festival.