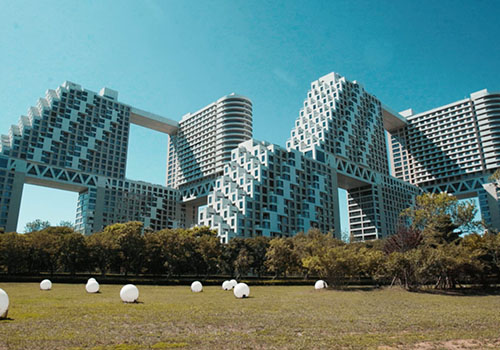 What is the ideal form of a contemporary house?
Moshe Safdie wrote the original proposal in 1964 when he designed Habitat 67, which became famous. Over the past 50 years, with the concept of continuous iteration, Safdie has “experimented” with several Habitat projects around the world, including the only Habitat house in Qinhuangdao, China. Combined with the characteristics of the site itself, a new residential form that allows people to live in nature even in the city is constructed.
Of course, it is obviously not enough to make the human body close to nature. Safdie's Habitat also pursues a spiritual ideal: how can architecture give people value beyond space? How to build a new kind of community? How to inspire a new way of life? In Moshe Safdie: Habitat in Nature, Safdie and Habitat owners share their ideas for new habitats.

Director's Statement
“We need to integrate architecture with nature.” What this pandemic and global climate emergency have shown us is that we need to recalibrate everything we do. In this short film, we trace the legacy of Safdie’s vision through the “utopian vision” of Habitat 67 to the newest forms of Habitat in Qinhuangdao, China, asking what makes for sustainable architecture today and in the future? Through first-hand interviews with residents of both Habitat 67 in Montreal and Habitat Qinhuangdao in China, this film accents the lasting impact the Habitat model has on the built environment, and on the lives of its inhabitants.

Producer : I-TALK A Meeting with Architects
A Meeting with Architects was initiated by I-Talk, The first original architecture documentary in China. You could come to the architectural scene and TALK with star architects, capture the moment of inspiration and explore the spirit of The Times.
The documentary aims to let the public have a deep understanding of the essence of architecture -- architecture is not only the communication of architects' ideas, but also a shared space that everyone can measure with their feet and feel with their spirit.
I-TALK Founder\Producer. As an independent producer, Julia produced The first original architecture documentary in China. Interview and shoot internationally renowned architects such as Alvaro Siza, Christian de Portzamparc, Moshe Safdie, Ma Yansong, Yongho Chung, etc.
Moshe Safdie: Another Dimension of Architecture won the Best Short Documentary at the 2020 New York Movie Awards.