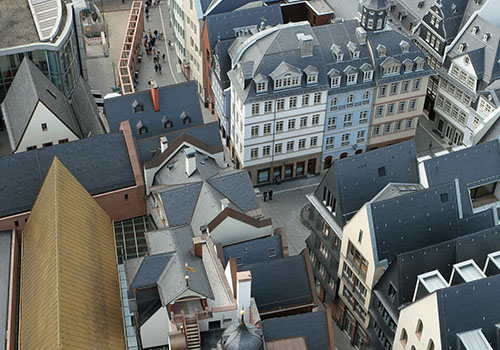 In Germany, decades after the destruction of the war and demolition, old is being made new once again. Many compromises were made during the disputes concerning the pros and cons of reconstructions.
This project aims to shed light on the reconstruction trend that has emerged in urban development over the last 10-15 years in Germany in a condensed manner. These reconstructions concern historic buildings that were bombed during the Second World War or blown up or torn down during the post-war period. After a process that went on for decades of destruction, tearing down, re-building and tearing buildings down again, many places are now seeing old buildings being reconstructed once more.
As different as the individual projects are, they all have one thing in common – that is, that it’s not just about a simple reconstruction anymore. These re-builds are much more like theatrical scale models. They are also a symbol for the compromises negotiated at length between politicians, citizens’ initiatives, architects, historians, investors, urban planners, lawyers and tax officials. These complex origins have resulted in rather bizarre building complexes in some places.
With seven distinctive construction projects as examples, this film takes the viewer on a journey into the centres of the German cities of Dresden, Brunswick, Leipzig, Frankfurt, Berlin, Potsdam and Nuremberg and, through its serial short form, creates a connection between these places. As well as the actual buildings, this project also explores the architectural references the reconstructions make to their immediate urban environment.
The film Reconstructed City (Reko City) fumbles as a silent observer between the hostile camps of reconstruction opponents and supporters, and attempts to give a concise insight into this urban phenomenon. The viewer is left to form their own impression.

Jörn Staeger was born 1965 in Berlin, since 1979 several short films work as cameraman for film and TV study 1984-1991 at Fine Art School Hamburg. Since 1990 develops own production: Staeger-Film.