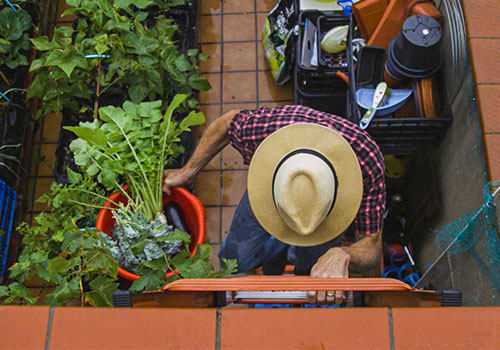 It’s not common to find retired middle-class gentlemen searching in the garbage container for food waste. The rest of the time Robert spends on his rooftops, hands in the dirt and praying to his corn totem for better crops. Not only does he offer a second life to abandoned rooftops but also a second life to old food, turning waste into food again. But for the garden to thrive, he strongly relies on the help of his neighbours otherwise the cycle could be broken.

Alexia Kraft de la Saulx was born in Brussels and raised in Spain. She studied Advertising in Brussels, Interaction Design in Tallinn and finally Documentary Filmmaking in Barcelona. Now she is 24 and she just finished her first short documentary film. With this film she hopes to inspire people as well as building contacts for my future. Her main career goal would be to direct feature film documentaries about people that bring a positive impact on the world and even better if traveling is involved.

Director's Statement
I’ve always grown in the mountains surrounded by nature. But in a big city such as Barcelona, plants would be so scarce. Therefore, I started growing my own plants on my terrace and a few months later the terrace was already full. By observing Barcelona’s rooftops, I realized there was so much potential to use those spaces for plantations. And that’s how this thought guided me to find Robert’s project on Instagram. As a first time directing a short documentary, I couldn’t find a better character than Robert. It is through a positive attitude, determination and love for this art that Robert has grown his own garden on the roof, setting a beautiful example of Barcelona’s green future.