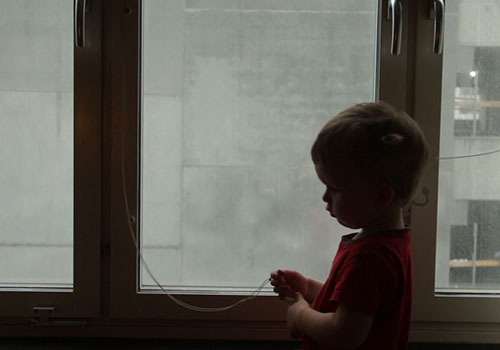 “We knew they were building something in the parking lot outside. We felt the house shaking and saw how the door frame and the stairwell burst.” In a vibrant short film, Astrid Askberger tells the story of how it feels to get a new wall ten meters from her window.
The film depicts how people become tiles in a larger game, but also how they with their own initiatives can find ways to relate to the rules of the game. In a poetic view of an individual event, something larger is caught, about us as human beings, the system and a sneaky notion of urban infill projects.

Astrid Askberger, born 1979 in Stockholm. Documentary filmmaker with a master at the Academy Valand. In 2016, her full-length documentary Greta’s guide to the galaxy had its premiere. A movie exploring the concept of freedom and the consequences of breaking free. She has also directed the documentary short films: The wall, I was there too, Love is the best at the cinema, and How things works! all shown on television and festivals.